Mike Goldstein was born at a very early age and has been drawing since then; in fact, Mike’s first drawing was a caricature of the doctor which he drew while being delivered.

At the age of 3, Mike created his first comic strip called “Willy The Worm” in which Willy battled birds and searched for juicy leaves and the comfort of soft, moist earth.  As a result of the time spent drawing, Mike recently learned how to tie his shoe laces and to eat with cutlery.

humorous illustration:   illustrating stories or a one-off event with wild and whacky drawings to get the point across;

caricatures:  exaggerating the features of a family member, pet, alien, famous person or enemy.  Caricaturing one’s enemy could lead to injuries which appear to be accidental in any police reports;

graphic novels:  for those who don’t like reading or can’t read, graphic novels convert the entire story to drawings.

Mike sees humour in everything and, at the risk of being politically incorrect, he finds the subjects of death, disease and phobias potentially the funniest subjects.  What isn’t funnier than the speaker at an Alzheimer’s convention forgetting the date and time of the next event or an epileptic brain surgeon or the sign on the Institute For Gay Studies indicating that visitors must use the rear entrance?

Mike has created and taught workshops for both children and adults (separately) as follows:

“Life Is A Cartoon” – humorous illustration

“My Dog Wears Pajamas” – creating and drawing your own cartoon character

Mike holds a Bachelor and a Masters degree in Landscape Architecture and is licensed as a real estate salesperson, none of which have anything to do with drawing.

He left Toronto’s rat race in 2014 – not being particularly fond of cheese – and semi-retired to Port Hope. 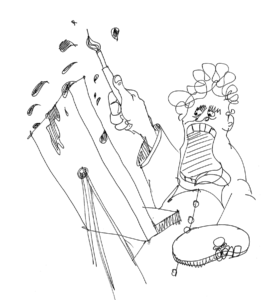